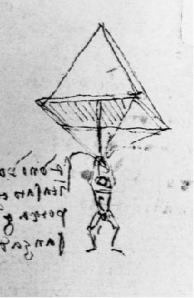 The term Parachute comes from the Greek para meaning “against,” and French chute meaning “fall.” The hybrid definition of parachute literally means “that which protects against a fall,” coined by French aviation pioneer Jean-Pierre Blanchard.

Long before the idea of safely dropping people and items out of the sky, Leonardo da Vinci drew his famous “parachute” sketch. This design, scribbled in a notebook around 1483, showed a sealed linen cloth held open by a pyramid of wooden poles. Da Vinci believed that, with the right tools, a man could jump from any height whatsoever without injury.

In 2000, a British man named Adrian Nicholas dropped from a hot air balloon using a contraption based on Leonardo da Vinci’s original sketch. While experts believed that the canvas and wood contraption would be too heavy to fly, they were proved wrong as Nicholas floated gently down to the ground.

Some believe that the first implemented parachute was created late in the 16th century. A few brave souls attempted launching themselves off of high buildings and structures using nothing but their parachutes for safety. Faust Vrančić, a Croatian inventor, was also dubbed as the Homo Volans (“The Flying Man”). It is legend that Vrančić used da Vinci’s rough sketches of the parachute to become the first man to actually design and test a parachute of his own.

It is said that Louis-Sebastien Lenormand, a French physicist and inventor, was the first person to make a witnessed descent from a tower using a parachute. His more modern intention for the parachute, similar to today’s life-saving purposes, was to help people who might be entrapped in a burning building.

Subsequent development of the parachute focused on the design becoming smaller and more compact. Inventors in the 1700s started making parachutes with lighter material and foldable capabilities.

The introduction of the first airplane in the early 1900s began the real parachute revolution, as militaries everywhere realized the true potential of aerial descent.