What is a Jumpmaster? 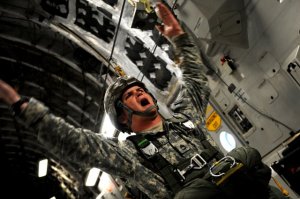 Jumpmasters are US Army’s expert Paratroopers in an Airborne unit who train and teach the Army techniques for jumping from airplanes. They are responsible for transforming Soldiers who enter Army Airborne School into Paratroopers and managing Airborne jump operations in Airborne units across all branches of services.

The jumpmaster has many critical duties and responsibilities, including ensuring each Paratrooper can perform certain airborne operational techniques. These techniques include:

Duties of the jumpmaster will also vary depending on location. For example, duties at a unit area may include, briefing personnel, organizing the planeload, and conducting prejump training. In flight, a jumpmaster will continually check on personnel, issue time warnings, oversee the preparation, placement and dropping off of free-fall bundles along with many other responsibilities. On a drop zone, a jumpmaster will be required to complete tasks such as accounting for personnel and equipment, and overseeing the care and evacuation of injured personnel. 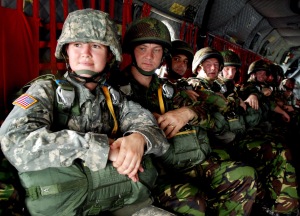 If you want to become a jumpmaster or assistant jumpmaster, you must be a graduate of a specialized school, such as the United States Army Jumpmaster School at Fort Benning, Georgia. In order to attend one of these schools, certain requirements have to be met. These include being appointed by an airborne commander, having a minimum of 12 months on jump status, current/up to date jump status, meaning a jump from any aircraft using any static line parachute with the exception of static line ram air within 180 days, a completed Airborne physical within 5 years of reporting, as well as other requirements.

The United States Army Jumpmaster School states that students must attain a minimum of 70% in all graded events and demonstrate a high degree of proficiency in the Jumpmaster Personnel Inspection by successfully inspecting three rigged jumpers within five minutes, achieve a score of 70% or higher, and missing no major deficiencies.