What is a Parachute Rigger?

The parachute rigger is a position essential to the airborne military services. Parachute riggers are responsible for preparing and repairing both cargo and personal parachutes for use in the field. In essence, parachute riggers make aerial operations and deliveries around the world possible. 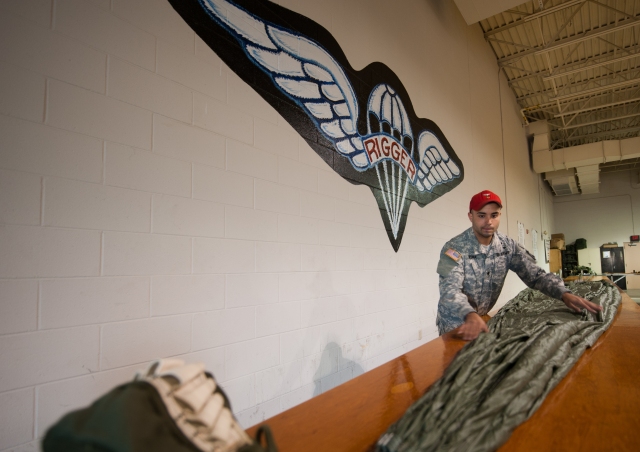 Further, riggers themselves are detail-oriented and precise in their work. It is understood that they are relied upon to ensure mission success and safety. There is great pride and commitment in this sort of work as seen below in the parachute rigger’s pledge.

I will keep constantly in mind that until men grow wings their parachutes must be dependable.

I will remember always that the other man’s life is as dear to him as mine is to me.

I will never resort to guesswork, as I know that chance is a fool’s gold and that I, a rigger, cannot depend on it.

I will never pass over any defect, nor neglect any repair, no matter how small, as I know that omissions and mistakes in the rigging of a parachute may cost a life.

I will keep all parachute equipment entrusted to my care in the best possible condition, remembering always that little things left undone cause major troubles.

I will never sign my name to a parachute inspection or packing certificate unless I have personally performed or directly supervised every step, and am entirely satisfied with all the work.

I will never let the idea that a piece of work is “good enough” make me a potential murderer through a careless mistake or oversight, for I know there can be no compromise with perfection.

I will keep always a wholehearted respect for my vocation, regarding it as a high profession rather than a day-to-day task, and will keep in mind constantly my grave responsibility.

The parachute rigger badge has been a source of pride and identity for riggers since the late 1940’s. The original badge was designed in 1948 by Major Thomas R. Cross in Sendai, Japan but was redone and finalized a year later at Camp Campbell, Kentucky.

Cross explained that the badge was meant to promote spirit amongst his parachute maintenance company and saw its popularity expand to other units as well. The badge, along with the signature red rigger baseball cap, became identifiers of riggers in the field. They were especially useful in critical locations such as loading areas and drop zones where riggers could be quickly located.

Despite its popularity, it took a considerable amount of time for the parachute rigger badge to be officially adopted by the US Army. It wasn’t until June, 1986 that the badge was authorized as permanent special skill badge. It is awarded upon the completion of the required parachute rigging training courses.