What is a Smokejumper?

In honor of the 19 Granite Mountain Hotshots this article will focus on a similar group of elite firefighters, the Smokejumpers!

What is a Smokejumper?

A smokejumper is a wildland firefighter who parachutes into rugged terrain to combat wildfires. By parachuting into fire zones, smokejumpers are able to combat fires in remote areas unreachable by other means. These firefighters are used as a quick, initial attack against the fires. 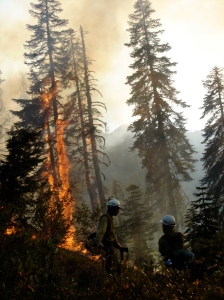 According to the California Smokejumpers association, smokejumper requests are signaled by loud blasts of an air horn. After this horn goes off, jumpers have 5 minutes to suit up in their protective gear equipment (clothing, harness, main parachute, harness reserve parachute, helmet, gloves and personal fire pack.) Once jumpers board the “jump ship” aircraft they then circle the fire as the spotter determines how many jumpers are required and the best jump spot for a safe and close landing.

After the first jumper lands on the ground, he or she contacts the aircraft to inform the other members of the crew of any hazards and any wind factors. Once the smokejumpers parachute to land they are airdropped necessary supplies such as food and water.

Smokejumpers deploy various tactics in order to suppress fires. The most common tactic is to direct fire line construction using chainsaws or crosscut saws. These tools are used to create a fuel break in order to stop the spread of the fire. After the fire is contained the smokejumpers then cool the remaining heat by stirring hot ash with mineral soil.

In 1957 the first fire jumps were out of a Lockheed Lodestar. The Lodestar, powered by two 9-cylinder radial air-cooled engines, was frequently flown by the Air Force in the 1940s. In the past smokejumpers have jumped from The Beech craft Model 18, also known as the “Twin Beech.” Other aircraft used by smokejumpers include Dh-6 300 series Twin Otter planes, as well as Shorts Sherpa c-23, Dornier and Casa aircraft. The Douglas DC-3TP, affectionally knicknamed DOUG by smokejumpers, has had a long and proud tradition of supporting smokejumper and paracargo operations.

History of the Smokejumpers

Between 1935 and 1940 the Forest Servcie as well as the Aerial Fire Control Experimental Project tested various efforts of controlling wildland fires, including dropping water and chemicals from planes as well as experimental parachute jumps. By the summer of 1940, the U.S. Forest Service Smokejumper Project was established. This operation was considered the first official group of firefighters that deployed from their aircraft. It is said that US Army Major William Lee observed the smokejumper techniques of those training in Montana and then incorporated them into the newly established U.S. Army 101st Airborne Division. Since its inception, heavy smokejumper utilization has continued. 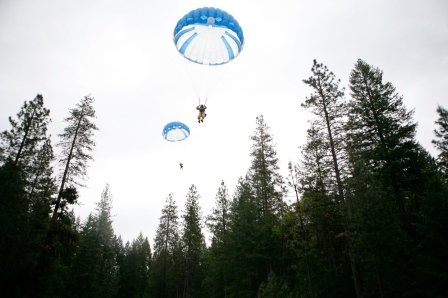 The US Forest Service, the Bureau of Land Management, as well as many other agencies responsible for wildland fire suppression continue to rely on smokejumpers. According to the US Forest Service, “after smokejumper training is complete, and during periods of fire inactivity, smokejumpers are assigned to various natural resource projects away from the base. These may include brush piling, prescribed burning and other fuels management projects, construction and maintenance of facilities, or trail maintenance. Their expertise is also used for assignments such as Remote Automated Weather Station coordinators, Fire Safety Specialists, Fire Management Officer positions on National Forests, technical writers and work with other agencies, such as the APHIS project – an effort to control invasions of long-horned beetles in Chicago and New York.”

Check out this CNN segment called “Inside the Flames.“