What is Aerial Delivery? 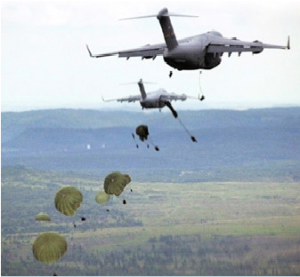 Aerial delivery is another term for the air drop of cargo, vehicle, equipment, and even people to a desired location on the ground. Because most threats to the military are on the ground, modern technology lends itself to aircraft airdrop at high altitudes and out of harm’s way. It allows a unit on the ground to receive the cargo at a location of the unit’s choosing.

In the military, the loadmaster is the active aircrew member who is responsible for loading and unloading the cargo and people on the aircrafts and aircraft systems. The loadmaster operates the very technical aircraft airdrop systems, ensuring a safe delivery of all materials and crew.

The Royal Air Force pioneered the capability in 1915 during Wolrd War I dropping supplies in Iraq. Airdrop of cargo started in the U.S. military duringWorld War II, with very little variation of practice since then. The U.S. Air Force began using precision ground mapping radars and computers in the 1970s, to allow the navigator to conduct precision airdrops from any altitude. Drops in the past were unguided, meaning that the load coming out of the aircraft was subject to high winds.

Today, many successful aidrop operations have been accomplished through improved technology and methods. In the military context, aerial delivery has become more accurate thanks to the Joint Precision Airdrop System.

According to the National Defense, precision airdrop are most useful in the difficult terrain or dangerous environments where the margin for error is very small. Airdrops can be used to resupply remote forces, pre-position supplies, deliver equipment following chemical warfare, and also be used for humanitarian efforts.

What is a Joint Precision Airdrop System?

A Joint precision airdrop is simple a joint science and technology efforts directed at increasing cargo airdrop accuracy and survivability from high altitudes. Military services of the United States have brought their efforts and resources together to pursue the Joint Precision Airdrop System (JPADS).

Aerial Delivery in the Military Today

Successful execution of military airdrops in high-risk situations is essential in the world today. According to the U.S. Airforce, half-way through 2011 Airmen had airdropped more than 39.5 million pounds of cargo in Afghanistan. Through the use of technical air-delivery systems, these aerial deliveries have successfully landed in designated drop zones.

Personnel should be trained extensively in aerial delivery, for safety and precision. Missing drop zone targets results in loss of payload and also adds danger to the personnel on the ground. Airdrop accuracy is essential; to not only avoid populated areas of endangered persons, but also to avoid accidental hostile location infiltration.

“The US Army will never control the ground under the sky, if the US Air Force does not control the sky over the ground.” — Col Gene Cirillo, USAF (Ret)